The Platform provides alternative CCUS infrastructure pathways, which introduce the possibility for many scenarios, particularly in rapid implementation of transportation and storage methods and subsequently creating prospective unambiguous business models, which were hitherto not possible or economically feasible. 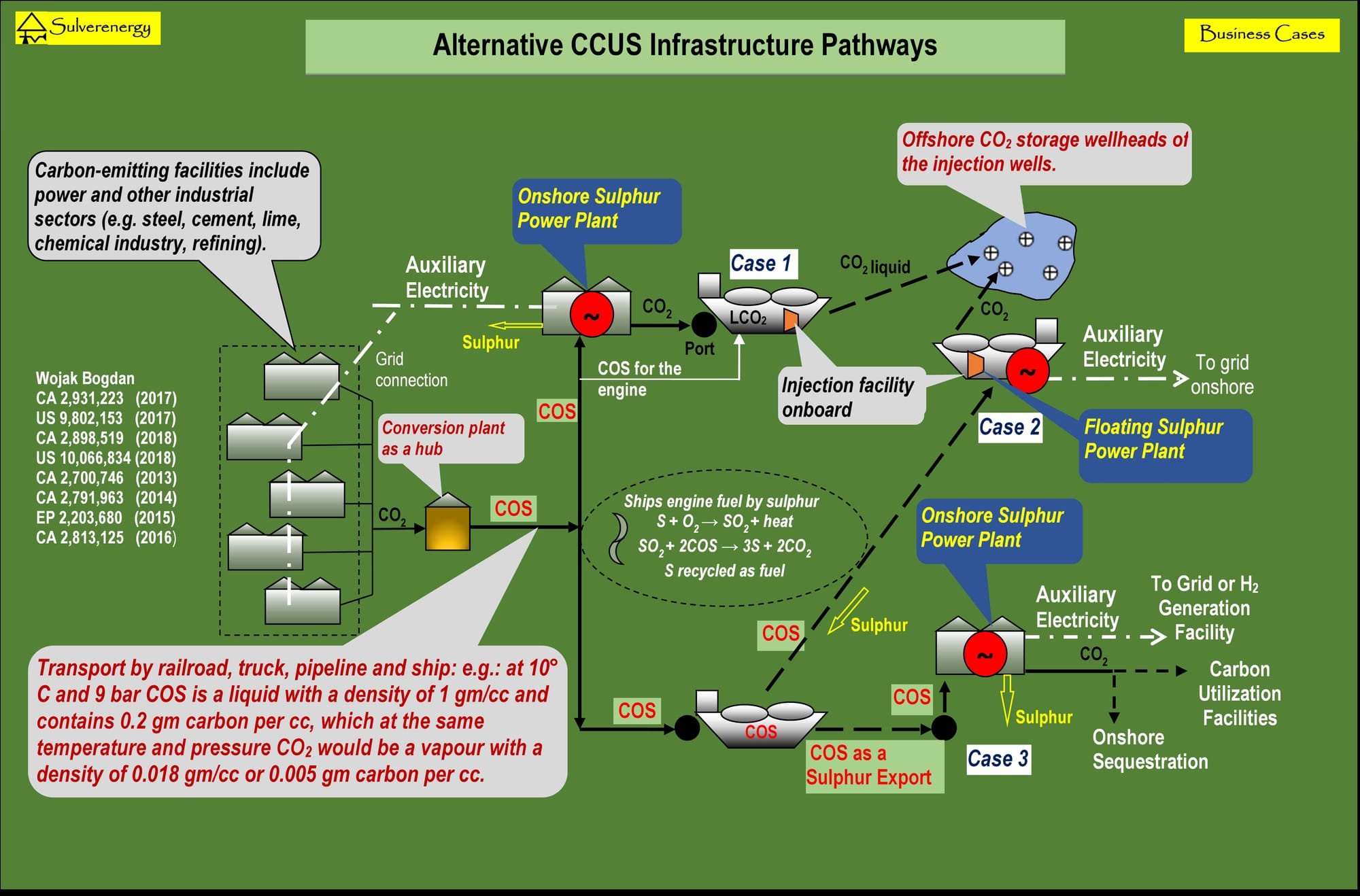 Some of these opportunities are:

The global coal-fired power sector is facing a persistently bleak future, with only the prospect of economical technology progress in carbon capture and storage likely to arrest decline. A low carbon future in terms of the stranded assets will have a profound impact on countries, industries and companies. Some studies suggest that globally a third of oil reserves, half of gas reserves and >80% of coal reserves would have to remain unused before 2050 and around $100 trillion of assets could be “carbon stranded”, if not already economically so, for us to have a chance of staying below the 2°C limit.

As a one of examples the potential solution scenarios for above problem is the implementation of the Hybrid Energy System (HES) for supplemental energy supply for oxygen generation that offers possibility of rapid retrofit of existing coal power plants to oxyfuel systems with the lowest costs compared to other zero emission technologies. The urgency  of  CCS retrofitting  is  further exacerbated  by  the significant  lifetime of  existing power  plants  and the  very  large number  of  plants likely  to  be built  over  the coming decades without CO2 emissions abatement. In  order to  meet  ambitious emission  reduction  levels at  lowest  cost, the  IEA Energy  Technology Perspectives  2010  (ETP 2010)  analysis  suggests that  CCS  retrofit will  play  an increasingly  significant role  until  2030. In terms of retrofit opportunities, the comparably large share of fairly young and large power plants that are installed and operating would suggest a rather large population of power plants to be suitable for retrofitting for CCS. This would arguably offer investors a greater expectation of return on investment, reducing uncertainty and correspondingly lowering the cost of capital. Developing these innovations and delivering such innovations to the European and global markets will strengthen the competitiveness and growth of partner companies and regional economies.

1.            The formation of the tangible value by the CO2 conversion may well stimulate individual companies to collaborate in the development of a carbon capture utilization and/or storage (CCUS) cluster utilizing Conversion Plant as a central hub. Thereby, as illustrated, carbon-emitting facilities (e.g. steel, cement, lime, chemical industry, refining, and fossil power plant) will be able to share a CCUS network infrastructure with, for example, an oxyfuel coal power plant without the necessity for supercritical transportation conditions, while simultaneously addressing hub participants’ various energy-consuming steps in the CCUS process. The ability to share transport and storage network infrastructure is a major component of CCUS cost reduction.

2.            Currently, the preferred techniques for capturing CO2 in cement plants are oxyfuel and post-combustion capture. However, CO2 capture by oxyfuel technology will increase the cement production cost by around 40% (excluding CO2 transport and storage costs) and post combustion liquid solvent scrubbing will increase the cost by around 70-100% (Annual Review 2013, www.ieaghg.org.). The same review concluded that post-combustion CO2 capture (i.e. capture of CO2 from different flue gases of the different combustion processes) in an integrated steel mill could be cost prohibitive for the reasons that it significantly increases the energy demand of the steel mill. The leading use of Oxy‐Blast Furnace (OBF) Technology is one of technology options considered to provide significant reduction of CO2 emissions from iron and steel production based on blast furnace (BF) and basic oxygen furnace (BOF) route. In both above presented cases, the implementation of the Platform for supplemental energy supply for oxygen generation can be the key for viable CCUS for these industries.

3.            Furthermore, Platform present specific opportunities in the case of refineries where the sulphur in petroleum fractions is most frequently found in the form of organosulphur compounds, which are commonly reduced by hydrogen to hydrogen sulphide (H2S) and hydrocarbons. The thermodynamics of some of the reactions of the organic sulphur compounds in the gas phase shows that, above 600 K organosulphur compounds tend to decompose to the reactive form of sulphur (S2), hydrogen, and carbon (C), and above about 800 K formation of carbon disulphide (CS2) from C and S2 becomes favourable. Therefore, with ample CO2 available in a refinery, there is a potential for the formation of COS instead of H2S.

4.             The proposed alternative CO2 transportation infrastructure may include both onshore and offshore elements and the sulphur fueled plant could be located either onshore and/or for example on vessels conveying the CO2 or COS to offshore storage.

Ships offer flexibility in the CO2 chain, a characteristic not possible with pipelines. Transport by ship can provide flexibility in combining CO2 from several sources, in changing capture sites, storage sites and the transportation routes in a CCS project, an attractive and viable alternative to overcome the limitations imposed by “sink-source matching condition.”  While pipelines require large capital expenditures up front, this is not the case with ships. Ships, on the other hand, have higher operating costs. The largest shipping cost components are electricity and fuel, each accounting for almost 30 % of the total cost. Capital costs only contribute around 28 % of the total shipping cost, compared to more than 70 % for pipeline transport. However, by employing the sulphur for powering ship engines (steam/gas turbine), the logistics of transporting CO2 to offshore storage areas will become economically feasible.

As the example (labelled as a Case 1 scenario below), liquid COS, delivered by various modes of land transportation to an onshore port facility, is utilized in the process of supplemental power generation distributed by grid to address the various CCUS energy requirements of the participating COS sources and then as “recovered” CO2, liquefied and pressurize (LCO2) is transported by a ship equipped with an onboard injection facility (injection pump, heater) powered by the ship’s engine and operated by ship personnel, to an offshore storage site, to be deliver directly from the ship to the seafloor wellheads of the injection well. Transportation of liquefied CO2 will require a liquefaction plant, loading equipment, as well as access to quay at port. However, no ocean manned platforms with accommodation for workers, and on which CO2 buffer storage tanks will be installed will be required (see: “Preliminary Feasibility Study on CO2 Carrier for Ship-based CCS”, document published on the Global CCS Institute’s website).

In another schematically shown scenario labeled as Case 2, the liquid COS is directly loaded to shuttle transportation vessels and transported to a floating HES hub at the offshore storage site to bypass the step of CO2 liquefaction. This avoids the costly tasks of constructing an LCO2 facility that might face a long series of regulation and permitting negotiations and require a host of new infrastructure on coastline. In this scenario, it is conceivable that the electric power generated by the floating sulphur powered plant can be deliverer to onshore grid by underwater cable. An example of comparable setting is the ship “Prelude” a Shell world first floating LNG plant (FLNG) park at the Australian coast, harvesting the gas from below, but also serving as a factory and store where tankers can pull alongside to load up with LNG.

In a different scenario, shown as Case 3, the liquid COS is used as a means of transportation of sulphur as a method of commodity exchange. Sulphur could then be recovered according to the above-described method resulting in energy generation/power and the CO2 being utilized or sequestered.

5.             By applying the HES as an energy source for the processes of the production of a hydrogen, methanol and synthetic fuels the purified and captured CO2 from coal combustion and purification systems at great expense can be reused as an industrial chemical feedstock thus contribute to alleviating global CO2 emissions.