Sulfur as the Unique Energy Vector for the Decarbonization of Various Industrial Processes, Including Hydrogen Making and the Permanency of Carbon Dioxide Removal.

Sulfur, aside from carbon and hydrocarbons, is the only other naturally occurring material from which energy can be harnessed by combustion. The theoretical temperature of adiabatic burning of sulfur vapor in pure oxygen, when the reactants (SO2, SO, S2, S, and O2) are in equilibrium, taking into consideration its dissociation process, is about 3000-3500° C. Burning diatomic sulfur (S2) in pure O2 in stoichiometric quantities would produce an even higher temperature-more than 5,000° C. 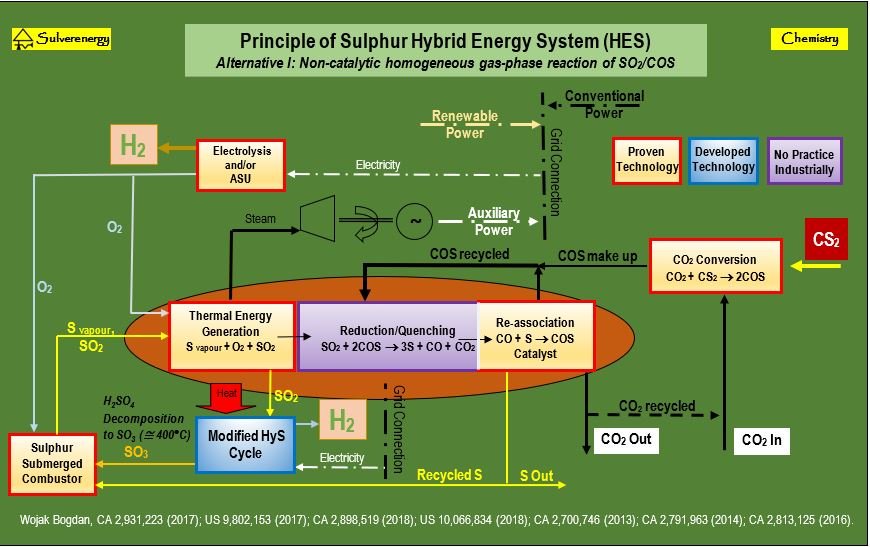 An interactive on-situ arrangement comprising sulfur fueled Hybrid Energy System (HES) for providing energy for the water electrolysis to produce oxygen (O2) for sulfur combustion significantly efficiency enhanced by coproduced hydrogen (H2) utilized in bitumen upgrading and/or in the process of catalytic reduction of gypsum (CaSO4) to calcium oxide (CaO).  Alternatively, gypsum is reduced by applying sulfur vapor (S2). The CaO is further used as an absorbent in the processes of Enhance Gas Steam Reforming (E-SMR), Direct Air Capture (DAC), and Carbon Dioxide Removal (CDR).  The arrangement also encloses the CO2 conversion process to intermediate carbonyl sulfide (COS) gas which, when oxidated by sulfur dioxide (SO2), the product of sulfur combustion, reduces it to sulfur and CO2, enabling the combustion energy value of sulfur without the detrimental atmospheric impact of sulfur oxides and to be regarded as renewable as a sulfur feedstock is recycling. 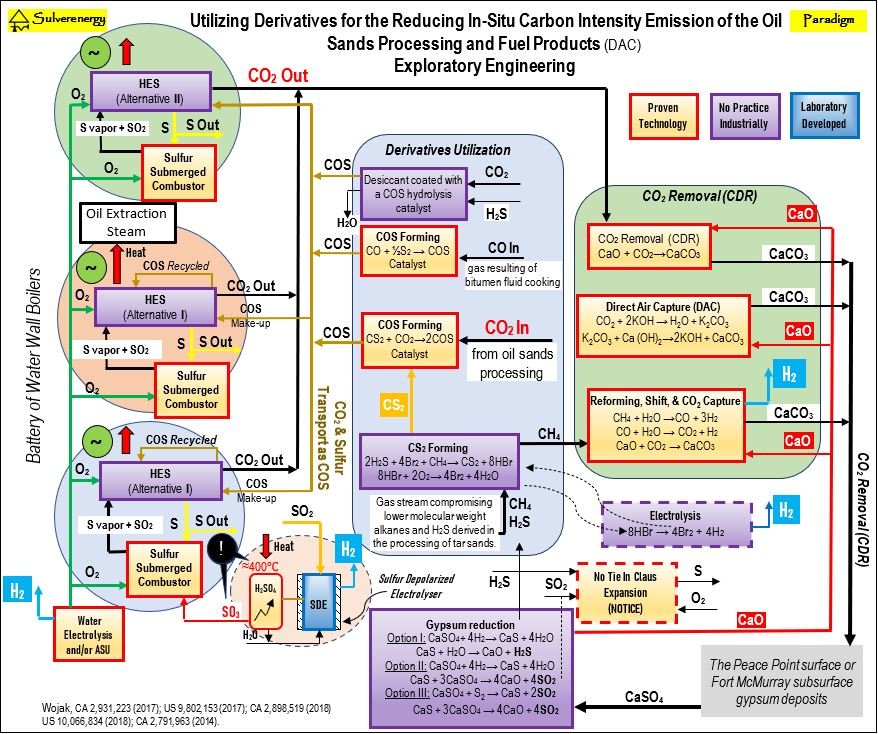 In addition, if required, the setup enclosed the modified Claus Oxygen-based Process Expansion (NOTICE) process that uses SO2 not only to act as a quench by absorbing sensible heat but also to reduce the extent of the exothermic H2S oxidation that takes place in the reaction furnace.

To improve the efficiency of hydrogen production on the scale, the modified thermochemical hybrid sulfur cycle HyS (also known as the Westinghouse cycle) can be enclosed. It uses the sulfur trioxide (SO3) directly from the sulfuric acid (H2SO4) decomposition at the temperature of 350 - 450° C and carrier to the bed of molten sulfur of the HES submerged combustor where the SO3 undergoes further chemical reduction to sulfur dioxide (SO2) thus reducing significant require a temperature of current art. Also, the hydrogen bromide conversion at the CS2 process forming can be performed via electrolysis.

Nearly all of the fundamental constituents of the Project are initiated from existing industrially proven technologies, or they are extensively reported in science or patent literature. Hence, the principles and mechanisms of the individual components are well-known and established. However, some specific elements of the system are based on certain simplifying assumptions about the essential chemical transformation of one set of chemical substances to another; thus, the objective of this stage of the project development is to assess how well the evidence provided fulfills the specified goals and then determine at laboratory bench scale, the scheme critical conditions and validate the requirements from sound engineering practices, applicable standard, or performance as an acceptance for the future facilitation of its commercialization. The future intention of this undertaking is to provide evidence that the Project holds the capacity for the creative perspective of worldwide universal, unambiguous business models as a sustained financial incentive to deploy mitigation technologies that were hitherto not possible or economically feasible.

How did the concept originate?

As a technological entrepreneur, I committed myself to the specific technology which can be provided a versatile, adaptable, 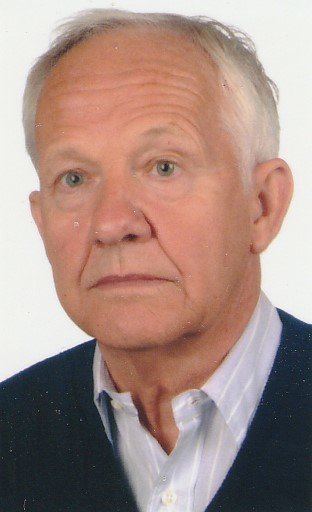 State-of-art waste remediation platform for processing the most common waste stream within one integrated system. To provide a versatile, adaptable, state-of-art waste remediation platform, I obtained a Battelle Memorial Institute license for vitrification technology to effectively treat and dispose of municipal waste materials without creating undue environmental contamination. At the same time, I initiated research on the application of vitrification technology for the treatment of phosphogypsum (PG), a by-product of processing phosphate ore into fertilizer with sulfuric acid. It is radioactive due to naturally occurring uranium and radium in the phosphate ore. With two of the US Department of Energy's (DOE) Pacific Northwest National Laboratory (PNNL) vitrification technology leading researchers, Chris Chapman and Richard Peters, I initially obtained research grants from the Florida Institute of Phosphate Research (FIPR) to investigate the manufacture of vitrified glass products from PG. Manufacture was successfully demonstrated on a pilot scale; however, the economics of the process would not justify commercial implementation due to the energy requirements of the process.

Methods and Systems for Transporting Sulphur as a COS, patent: CA2791963.

Sulverenergy gratefully acknowledges the generous funding from Florida Industrial and Phosphate Research Institute (FIPR) and Thomas Dutcher, who has forty-seven years of project engineering, engineering design, and construction management experience, and as a successful business owner. His work includes over twenty years of incineration and waste-to-energy engineering development.

The chemistry, thermodynamic, and energy/mass balances for the method of sulfur combustion as the kinetic simulation of the reduction of sulfur dioxide (SO2) by carbonyl sulfide (COS) have been performed by Dr. Kunal Karan of the Department of Chemical Engineering of Queens University in Kingston, Ontario.

A special thanks to Dr. Laszlo T. Nemeth, co-inventor of the CO2/COS conversion process, for several thoughtful and stimulating discussions of this work.